What did the critics think of the film with Romain Duris? 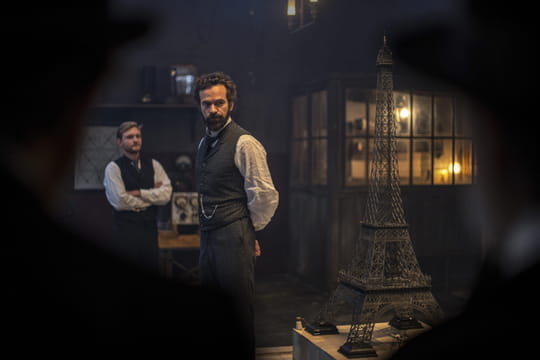 EIFFEL FILM. Martin Bourboulon films Romain Duris as Gustave Eiffel in the film retracing the construction of the Parisian monument. But is the Eiffel film worth a look? The opinion of critics.

[Mis à jour le 13 octobre 2021 à 12h03] It is the story of the Iron Lady that is brought to the big screen. The film Eiffel, directed by Martin Bourboulon, looks back on the romance between Gustave Eiffel and Adrienne Bourgès but above all on the history of the construction of the Parisian monument which made France famous internationally. In the casting of the biopic, in theaters this Wednesday, October 13, 2021, we find Romain Duris, Emma Mackey and Pierre Deladonchamps. But is the bet of telling the story of the creation of the Eiffel Tower in the cinema paying off? Overall, the critics seem globally conquered by Eiffel. La Croix salutes a « fine work on the light and energy of its performers », while La Voix du Nord praises a film which « reconnects with an ambitious, popular and generous French cinema ».

For its part, Le Parisien praises « a great romance, epic, romantic », although the biopic takes « some liberties with known reality ». The specialist magazine Première is also won over, hailing a « successful bet » which « reconnects with a genre of French cinema in its own right. […] the historical film in popular costumes « , extolling the alchemy between the two main actors. Eiffel completely immerses the spectator in Paris of the 19th century, although Télé Loisirs deplores that the history of the construction of the Iron Lady passes to the second An opinion shared by Le Figaro: “Eiffel is a bit like Titanic without the Titanic.” Lovers of great historical films and upset romances will certainly find what they are looking for, but perhaps those who seek to discover them all. the subtleties that led to the construction of the Eiffel Tower will be disappointed by the proposed story.

The Eiffel biopic, with Romain Duris in the title role, looks back on the construction of the famous Parisian monument. If the historical reality of the stages of the construction site seem to have been respected, a descendant of Gustave Eiffel rose up in the JDD that the love story told in the film, which would have inspired the construction of the Eiffel Tower, was largely fictionalized: « We are going against the historical truth, » says Philippe Coupérie-Eiffel to the weekly. However, the official association of the descendants of Gustave Eiffel dissociated itself from his remarks and chose to support the film. According to Christine Kerdellant, author of the book « The true story of Gustave Eiffel » which spoke to France Bleue, the shape of the tower would not be a reference to the shape of an A, a tribute to a woman he would have liked whose first name began with this letter (which would therefore be Adrienne Bourgès), contrary to popular legend.

Synopsis – After having finished working on the Statue of Liberty, Gustave Eiffel embarked on a new project for the Universal Exhibition of 1889, which was held in Paris.

Bikers express their anger in front of the Hôtel-de-Ville

[ad_1] A new demonstration of angry bikers took place this Sunday, October 24. Paid parking for motorized two-wheelers, Anne Hidalgo's project for 2022, does not pass. In front of the Arc de Triomphe, unpacked (it was packed on September 18, date of the previous...

We use cookies on our website to give you the most relevant experience by remembering your preferences and repeat visits. By clicking “Accept All”, you consent to the use of ALL the cookies. However, you may visit "Cookie Settings" to provide a controlled consent.
reglagleAccepter tout
Manage consent

This website uses cookies to improve your experience while you navigate through the website. Out of these, the cookies that are categorized as necessary are stored on your browser as they are essential for the working of basic functionalities of the website. We also use third-party cookies that help us analyze and understand how you use this website. These cookies will be stored in your browser only with your consent. You also have the option to opt-out of these cookies. But opting out of some of these cookies may affect your browsing experience.
Necessary Toujours activé
Necessary cookies are absolutely essential for the website to function properly. These cookies ensure basic functionalities and security features of the website, anonymously.
Functional
Functional cookies help to perform certain functionalities like sharing the content of the website on social media platforms, collect feedbacks, and other third-party features.
Performance
Performance cookies are used to understand and analyze the key performance indexes of the website which helps in delivering a better user experience for the visitors.
Analytics
Analytical cookies are used to understand how visitors interact with the website. These cookies help provide information on metrics the number of visitors, bounce rate, traffic source, etc.
Advertisement
Advertisement cookies are used to provide visitors with relevant ads and marketing campaigns. These cookies track visitors across websites and collect information to provide customized ads.
Others
Other uncategorized cookies are those that are being analyzed and have not been classified into a category as yet.
Enregistrer & appliquer